This summer I spent several weeks in Mexico City teaching a class for an immersion program for psychology and MFT students. I packed light and only brought two gadgets with me – my laptop and iPhone 5s. My iPhone was tucked safely away in an inexpensive wallet case where I also carried a key card for my apartment, university ID, and a business card for a local taxi service. I often only carried this wallet-phone in lieu of a purse. It basically had everything I needed and then after less than two weeks in Mexico City, the unimaginable occurred: I lost my wallet-phone.

Admittedly, I felt a surge of panic. The next 24 hours was spent ruminating about where my phone was and how I could get it returned to me. This was followed by multiple logins to iCloud to “find my iPhone”, incessant calls and messages via Skype credit to people who may have it or seen it or taken it from me as a cruel joke, and prayers that it would just show up at my doorstep…

The grief process commenced: Denial, Anger, Bargaining, Depression, and Acceptance. “Someone will return it.” “I’ll find it at my friend’s house.” “The taxi driver definitely has it.” “At least it’s not my wallet… wait, I’d prefer to lose my wallet!” “It’s all replaceable.” “What am I going to do without my phone?!” Ad nauseum. Still, at the same time, I knew that I would be okay. Sure, I didn’t back up my photos or other information but I can just ask others to share their photos. All was well.

Other options I considered was whether I would purchase a new iPhone and have it shipped expedited to me in Mexico City. Or perhaps I could just buy a dumbphone and liberate myself from the world of plugging in. Or maybe just not have a phone. After serious contemplation and consultation, I decided a basic phone would be good to have in case of emergencies. Basic meant no photo messages, no internet, and no apps. It was the kind of phone where you pressed a single button multiple times to get to the number and it had clip art icons you could associate with names in your contact list to delineate sex or relationship (e.g. hombre, mujer, abuelita, nino, etc.) I genuinely did not know how to use this phone. And I really did not use it. I spent the remainder of my weeks in Mexico City without a smartphone. When leaving the house I searched for directions to all the locations I was visiting on google maps and wrote them down on scratch paper (remember those days?). A few times, activity schedule changes were announced via Facebook or text messages, so I was unaware. Being unplugged led to much more time alone.

The contrast was most striking when I was socializing with others. The thing about Mexico City is that while many are equipped with smartphones, there are also a lot of people who use basic phones. When engaging with a hybrid group of smartphone users and basic phone owners, it was almost as if there was a line dividing the two groups. Looking around, I saw smartphone users, well, using their smartphones… fingers swiping sideways, up and down, two thumbs speedily typing away, people taking pictures of everything. People really use them. The basic phone users or those without phones were either watching the smartphone users doing their smartphone thing, or talking to each other, or… wait for it… just sitting there. People without smartphones just sat or stood where they were, quietly, observing.

I started to see my predicament as a blessing. Over the next few weeks, I noticed I was sleeping better at night, taking naps, feeling calmer, more focused, and less anxious. In a recent Huffington post article by Menas Kafatos and Jay Kumar, research is cited suggesting the necessity of taking “mental breaks”, or unplugging, to help our brains synthesize and process stimuli and tap into our “non-linear” and intuitive nature. Nevertheless, there are drawbacks to not being plugged in. The drawback for me was feeling disconnected and I often missed having a camera or being able to chat with loved ones over iMessage or WhatsApp. But generally speaking, I also felt more liberated. I was left out of a lot but it also meant I had more time to myself.

This experience really made an impression on me. I have written about the challenges of our iCulture in the past, and the impact of gadgets on our lives is common knowledge. Yet, despite knowing the negative impact of technology overuse, as a society (in some ways globally), our lives ask us to be plugged in. The question remains of how we stay plugged in enough to function by also unplugged enough to function?

Despite all the benefits of being without a smartphone, upon my re-entry into the U.S., I purchased a new one. I received it with less excitement than past phones. The deciding factors were that I wanted a camera, WhatsApp, FaceTime, email, calendar, maps, and music all on the same device I use to make phone calls. The main deterrent from rejoining the dumbphone world was phone overuse and just plain being rude to my company. But I can choose use my phone differently. I appreciate that I can connect with loved ones more frequently, manage my life digitally, and take a picture of a heart-shaped oil stain on the floor if I want to… but I also feel good about turning my phone off more often, not putting it on the table while I am having lunch with loved ones, or leaving it at home to spend time with myself while taking a walk. 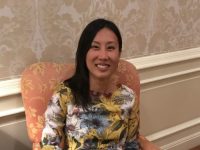